Is weight loss harder for men or women? Looking for a quick answer? Trawl the weight loss message boards and you’ll find plenty. Check out this recent article from LiveScience and you can get a definitive answer before you even read the article: ‘Yes, Men Lose Weight Faster Than Women. Here’s Why.’

The author, Cari Nierenberg, has largely drawn her conclusion from a comprehensive study published in the journal, Diabetes, Obesity and Metabolism [DOM]. An international team of twenty-four scientists monitored over 2,000 candidates as they completed a crash-diet of just 800 calories per day(!) for eight weeks.

The sad truth for half the population is that Nierenberg is pretty much right. Weight loss –and more specifically, fat loss, but more on that later – is generally more difficult for women than men. But before you take their findings as gospel, there are a few factors and questions we want to answer:

So, let’s get stuck in to the details.

Sound familiar? How many adverts have popped up on websites and apps that look like this? And what exactly are they selling?

We’re not talking products or services here. We’re asking: what are they selling you on a psychological level? Time. Life hacks. A short-cut. Call it whatever you want. What matters is, it’s built into our digital DNA to look for the quickest results that require the least amount of work.

Your weight loss journey shouldn’t be a quick one. Check out this video (Jump to the 7:02 mark.) from fitness guru and elite sports trainer, Jeff Cavaliere, who compares how long-term strategies for your controlled diet and exercise program make a massive difference for sustainable results:

Now, the study in DOM lasted just eight weeks. We asked earlier, was the test fair? What do you think? It showed results, sure. But we’re talking about lifestyle changes here. Let’s look at how they play out on a longer time-scale:

As Justin Caba’s op-ed for Medical Daily summarizes, a weight loss study by experts across five universities in the UK found that these stats tend to balance out in the long-term. Although men will tend to see results more quickly, “By six months, the rates of weight loss among both men and women were identical.” Arguably, the diet and exercise plans themselves aren’t the biggest piece of this puzzle. Sticking to them – that’s the real challenge. 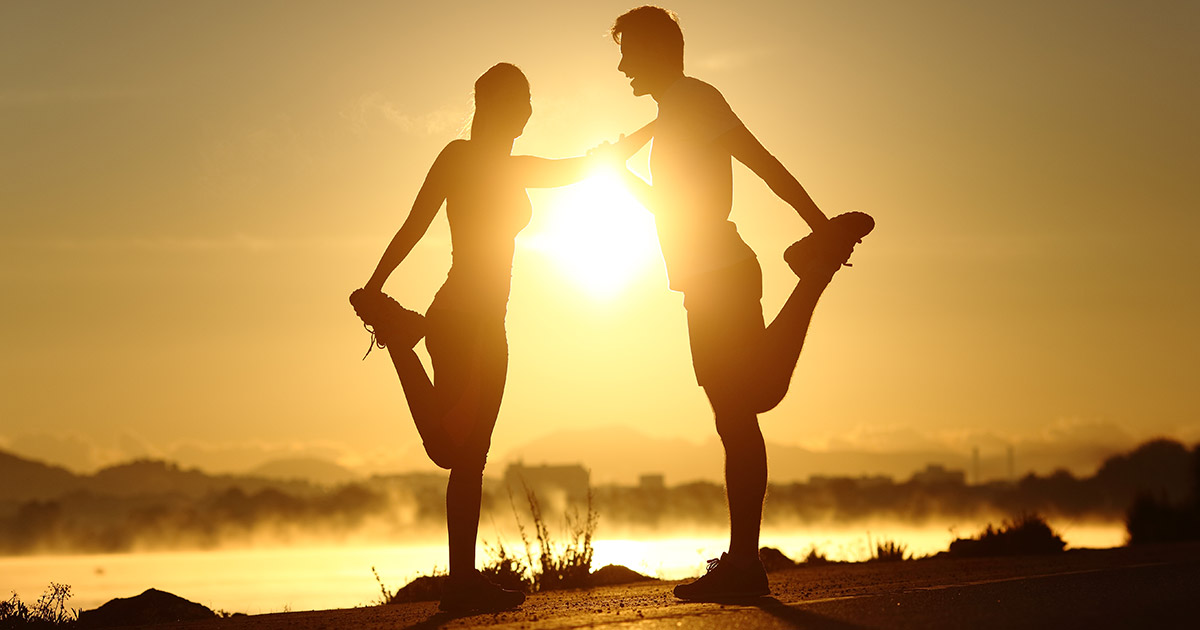 Moving swiftly northward from the belly to the brain, the Yale Journal of Biology and Medicine published findings in 2016 that suggested this is a more difficult daily battle, in general, for women: “in an [sic] functional magnetic resonance imaging (fMRI) study investigating neural reactivity to palatable food images, women showed greater activity in craving and taste-related brain regions such as the anterior insula in response to food cues as compared to men”

That’s not to say it’s easy for either sex to trim the excess. The important thing to take from these findings is that staving off cravings for a couple of weeks is anyone’s game, but the long-term goal requires discipline.

As Dr. Jason McKeown explains, "The neural mechanisms that influence weight loss are extremely complicated... so, not only does weight loss affect appetite and fullness, but it also increases cravings.”

There’s no secret formula. Success is a result of committing to your diet and exercise plan, whilst figuring out how to battle these erratic cravings! As craving levels fluctuate at different rates from person to person, and minute to minute for each individual, that’s a tough cookie to crack. “It’s important to realise these are built-in mechanisms that aim to stop weight loss – so, people should expect them, work around them and not beat themselves up if they give in from time to time. The idea behind Modius is to reduce all of these changes... but it still requires willpower!"

Seems like it’s a bit of a battle for anyone to lose weight, regardless of their sex. However, our question, “Is weight loss harder for men or women?”, is leaning towards an answer. But we want to dig a little deeper. Like we asked earlier, why is it harder for women?

There’s plenty more to consider, so, stick with us.

We’re talking men vs. women. Hormone levels are something we’ll be looking at, but before we delve inside the body, there’s an important external factor that we can’t skip over…

Nutritional guidelines and percentages on food products tend to be based around a 2,000-calorie diet for women and 2,500-calorie diet for men. The candidates in the DOM study were all categorized as ‘overweight’, therefore it is safe to assume their diets exceeded these numbers. However, for argument’s sake, let’s take these figures as examples.

If a woman reduces her daily caloric intake from 2,000 to just 800, she is consuming 40% of what her body has been used to. It’s a significant jump. The men, however, jumped further, so, it’s not surprising they made a bigger dent by the time they landed. Dropping over two-thirds (a whopping 68% to be precise!) of their recommended 2,500-calorie benchmark isn’t exactly a level competition.

The conclusion is straightforward, right? Bigger deficit, bigger losses. If those are the rules, we’d like a new game, please!

But what exactly were they losing?

When we talk about ‘weight loss’, most of the time the goal is actually ‘fat loss’. Nierenberg cites bariatric endocrinologist, Dr. Elizabeth Lowden, who elucidates that “Men, thanks to their body composition, have more muscle and a higher metabolic rate then women. […] Women, on the other hand, typically have more subcutaneous fat, which is fat around their thighs, rear and hips that is important for childbearing.”

This biological difference absolutely supports Nierenberg’s answer to this weight loss battle of the sexes. Additionally, it opens arguments into caloric changes being just one factor in specifically losing fat. The type of training you’re doing and the macros you’re following in your diet plan are massive factors in your weight loss journey.

You wouldn’t lie, would you?

We’ve already mentioned that the starting block isn’t level. Men are recommended to consume 25% more calories than women. It’s a sizeable difference and welcomes more immediate results from set calorie-based diet plans. But how much food are we really feeding ourselves?

So… we’re all kidding ourselves? Not exactly…

When people start a weight loss plan, their weight tends to be the first thing they look at. The pattern goes a little something like:

If we’re being honest with ourselves and realistic about our goals, the process needs a few augmentations:

What if you’re already consuming less than you should be? Or perhaps you’re way over what you thought? Did you definitely include everything?

Here’s where you step in and your sex jumps out the window. You are you. You weigh a certain amount and you eat so many calories a day. There’s a reason there are so many different diet plans and exercise programs out there. Test drive a few.

Variables of the month…

“The relationship between kilojoules consumed and kilojoules utilised is different in men and women. The reason for these sex differences in energy metabolism is not known; however, it may relate to sex steroids, differences in insulin resistance, or metabolic effects of other hormones such as leptin.”

It’s all well and good looking at how many calories we consume, but how many are getting burned off? A diet and exercise plan pushes the weight loss results in your direction by a one-two punch of eating less and sweating out any surplus. Importantly, this combo also helps to ensure you’re losing fat, not just weight. As Wu and O’Sullivan point out, however, just as men and women consume different quantities, we also burn that energy differently.

Unfortunately, “current weight loss studies rarely measure craving or menstrual phase, or test for gender differences in outcomes,” and “for women, there are sex hormone-related variations in craving and food cue reactivity that may hinder dieting and weight loss attempts.”

Leptin is known as “the hormone of energy expenditure”. While it works away at fighting off cravings, it is in a constant state of war with ghrelin, “the hunger hormone”.

As always, the levels of these hormones rise and fall constantly. Leptin drops during exercise and with rises of testosterone, whereas it increases with spikes in oestrogen. During the menstrual cycle, hormone various hormone levels are fluctuating at different rates. Progesterone and oestrogen in particular during the luteal phase. And as Dye and Blundell have surmised, “it has been reported that women experience as much as 57 percent more craving in the luteal phase than in the early follicular phase”

Between the body’s control over the release of leptin, stages of bloating during digestion and varied hormonal imbalances during the menstrual cycle, maintaining steady weight loss is particularly challenging for women. Allowing the process to be unbalanced will not only help you to monitor your overall weight/fat loss, but lets you read and react to your body’s needs. Combine these factors and you are more likely to maintain a more positive mood and therefore enjoy your body transformation journey even more.

“Is weight loss harder for men or women?” Cari Nierenberg isn’t wrong – the science leans in men’s favour, but like most things relating to the impossible nature of human beings, it’s not an exact science. Regardless of your sex, a number of internal and external factors will impact your hormone balances and therefore your will power in adhering to a particular diet.

Knowledge is power, so, find out as much about your body as you can. Rather than stepping on the scales, invest in a body fat analysis. Worried you may have a hormonal imbalance? Speak to your doctor. And if you’re not seeing immediate results, remember this is a journey, and the most rewarding journeys in life take time. You’re worth the wait.